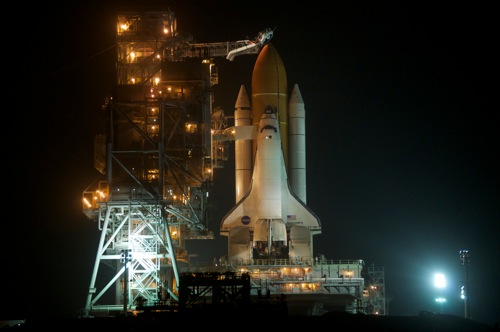 somafm.com is broadcasting a live feed from NASA mission control layered with ambient music. It's addictively ominous. Listen between 4 and 5 ET today for the 39th and final takeoff of space shuttle Discovery.

(Tuning in to preflight mission audio over the past 24 hours, I've been struck by the tension between the images in my head of what NASA mission control looks like — images from the cold war era, i.e. men in shirtsleeves — and the live voices I'm hearing, many of which are female.)
Posted by Sailor Dog Handel at 9:07 AM

Q:  What kind of theater excites you?

A:  Theater that isn’t boring or unintentionally confusing

Ask yourself whether this is primarily a way to meet your own artistic or career needs. If so, then give yourself a time period in which you will devote at least at much energy to advancing your career in other ways as you were going to spend reading that Nolo Press book on how to incorporate.  Make meetings with larger theaters to see if you can join forces, try to see if you can connect with someone else with a space, an audience, some kind of demand that you can supply.

One question for: Young Jean Lee, cabaret neophyte
(from Time Out New York)
Posted by Sailor Dog Handel at 9:26 AM

Lascivious Something (and other things)

Now available from Soft Skull Press.
Posted by Sailor Dog Handel at 11:37 AM

The always restless American Voices New Play Institute at Arena Stage has launched an online journal of provocations, HowlRound. Here is Meiyin Wang on "The Theatre of the Future":

Theater will be performed by audiences—as in Rotozaza’s Etiquette—where two participants sit across from each other at a café table, listening to instructions over headphones, moving around objects and participating in the enactment of a narrative. Or, as in Gob Squad’s Kitchen, where the collective attempt to recreate Andy Warhol’s underground movies, where by the end, the four performers are replaced by four audience members on stage, participating in this quirky meditation of the unknowability of the past and optimism for the future.

I quote Ben Cameron, from the Doris Duke Charitable Trust, who spoke so beautifully at Under The Radar this January—who compared the religious reformation in the 15th century and our current Arts Reformation—“which is dramatically shaped by new technologies and a massive redistribution of knowledge. With the means for cultural and artistic production and distribution having been democratized. There is a term, pro-am, amateurs who are doing work professionally—a group expanding our aesthetic vocabulary, even as they assault our traditional notions of cultural authority and undermine the assumed ability of traditional arts organizations to set the cultural agenda.”

With increasing interactivity and participation from audiences who are no longer satisfied to be on just the receiving end, content changes. Form changes. Authorship changes.
Posted by Sailor Dog Handel at 7:43 AM

Winning things: in which sexually ambivalent siblings explore the limits of their postapocalyptic reality

It's a privilege to helm a dramatic writing program where the MFA candidates are working professionally in the field — and working now, during their time at Carnegie Mellon. The latest news:

Plight of the Apothecary by Liza Birkenmeier (MFA '12) opens this week at the Red Room in New York City (located above KGB Bar, where Brooklyn writers show their authenticity by drinking PBR). More from New York TheatreNet.

Liza's play Jib and the Big Still, which was written last semester as an assignment for CMU's collaborative class Theatre Lab, will be produced in the Chaos New Works Festival at Lincoln Square Theatre in Chicago this spring.

A full evening of one-acts by Peter J. Roth (MFA '12) will be produced in Los Angeles by Fresh Baked Theatre Company — including Quick and in My Arms, which was developed last month at the Kennedy Center American College Theatre Festival Region II Conference.

Hole in the Head by Murphi Cook (MFA '12), The Wind Farmer by Dan O'Neil (MFA '11), and The Copper Anniversary by Peter J. Roth were selected from over 400 entries for readings at the Great Plains Theatre Conference. Two scripts from CMU were in the conference last year as well. Also in residence will be CMU dramatic writing alumnus Brian Silberman, as well as the fabulous Lee Blessing, Constance Congdon, and Caridad Svich.

And in observance of Valentine's Day, Dan's play The Seahorse is Monogamous – another project from the Theatre Lab class – will be at the Viaduct Theatre in Chicago as part of their DRAMEROTICA festival.
Posted by Sailor Dog Handel at 9:15 AM

Don't let your children grow up to be theatre people.

This video from the Guardian attributes Julian Assange's isolated and nomadic personality to the fact that his parents ran a touring puppet theatre. Seriously.
Posted by Sailor Dog Handel at 8:58 PM 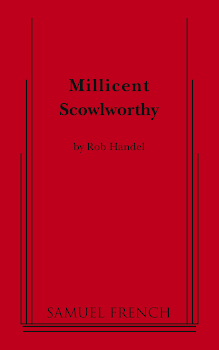 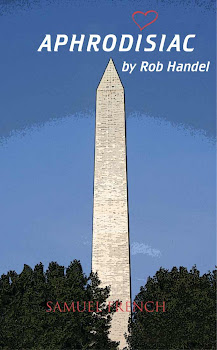